Are you looking for free things to do in Manchester?

When going on a weekend away with the family, a romantic getaway, or taking some time out with friends, then Manchester has it all. Take a read through our guide on what Manchester has to offer and free things to do.

In the northwest of England, it’s a historic city with strong ties to the cotton industry during the industrial revolution.

Manchester is the most forward-thinking and progressive city in the north of England, often rivaling London:

This guide makes up our series of things to do in England without spending a penny. We looked at Sheffield which is a 40-minute train ride from Manchester and we’ve looked at Leeds which is also a nothern city.

Although it has its footballing reputation, Manchester is quite an interesting mixture of traditional and modern.

Walking past the Midland Hotel and the Central Library, you pass the new tram lines and boutique hotels.

Free Things to do in Manchester

The Mancunian Mecca of Manchester is home to two of the biggest football teams in the world and as part of our best places to visit in Northern England series, we are taking a closer look at this city.

The question is though, is there a lot to do in Manchester that’s free?

Well, of course, there is! We have free entertainment covered for the family, friends and couples during your stay in Manchester.

I’ve compiled a list of free things to do in Manchester, as well as a guide to the city’s eateries and nightlife.

Let’s jump right into the museums!

A distinctive museum at the heart of the city. Originally home to the world’s first inter-city railway, the five buildings that house the museum are all listed.

Despite a clear historic appeal, the science program within the museum is extremely high-tech and modern.

Every year, this museum hosts the flagship science festival. Highlights of the museum include the John Dalton story, the James Joule section, and every item relating to the birth of computing.

An often-overlooked aspect of Manchester’s history is the infamous ‘baby’, the world’s first electronic stored-program computer built in 1948. A life-like replica of the Manchester Baby is on display in the museum.

The museum is located in the centre of the city and is free to enter. Rated as one of the top 10 things to do in Manchester.

The UK’s leading university museum with five floors of galleries.

The museum has a variety of events and projects throughout the year which can be found on its website, ensuring each visit is different. If you’re looking for free things to do with the kids in Manchester then why not have a history lesson at the museum.

Originally built as a gallery for a learned society in 1823, the Manchester Art Gallery is the gold standard of art galleries in the northwest.

It houses a collection of over 25,000 pieces from all over the world and all different timespans.

You could easily spend a day browsing the collection, which sometimes has a traveling exhibition come through its doors.

Recently, the award-winning Da Vinci exhibition was so popular, that visitors had to book a time slot to view the exhibits.

Transport yourself back in time to the Victorian era. With old houseboats on the first canal built in Britain as well as the rust-colored buildings.

The area dates back all the way to the Roman era, as Manchester was just a small village with a few inhabitants.

One of the largest conservation areas in Manchester, Castlefield is situated on the southwest side of the city center. The name Castlefield derives from its original intention: a castle to be built in a field as a military strongpoint.

The recent revival of interest in Castlefield is having a significant impact on the refurbishment of buildings. Warehouses have been converted to flats, offices, galleries and studios.

Housed in a former Victorian fish and poultry market in the heart of the Northern Quarter, MCDC has been going strong for over 30 years. The Oak St Cafe is a must for a coffee or spot of brunch.

It has provided a home to some of the region’s most talented independent artists, designers and makers, selling textiles, jewelry, ceramics, prints, fine art, sculpture and more.

With a program of exhibitions, events and workshops, the center has all sorts of things happening. A fun thing to do for adults in Manchester as you explore the arts.

Families and young’uns will love a day out at the Manchester Donkey Sanctuary.

Get up close and personal with some of the cutest and friendliest animals in the world. Check out a live cam of the donkeys, or see them in person yourself.

This donkey sanctuary is actually located outside of Manchester’s city center so it is perfect for those looking to do a mini day trip from Manchester or have the possibility to travel there by car.

Stuck on what to do with kids in Manchester? Then this donkey sanctuary has you covered.

The iconic building in the middle of the city center has an amazing collection. Open as a public library, it’s also Manchester’s home of the BFI archives.

Comfy couches with flat-screen TVs are free to use, the archive has some of the best British-made films along with some old classics.

The Central Library can transport you into a blast from the past, all for a suggested donation or visit to the gift shop.

If you’re near the central library area during December, Manchester is home to one of the UK’s best Christmas markets so check that out too.

Places to Eat in Manchester

If you’re looking for a bite to eat during your visit to Manchester, there’s a lot to choose from.

I will suggest not to visit the chain restaurants and fast food places in the city centre, only because you wouldn’t need an online guide for them.

Plus, the money that goes into the independent restaurants and cafes gets circulated into the local community.

Unlike other city centers in the north of England, Manchester boasts some of the gastronomic greats unknown to the rest of the country.

Adam Reid at the French

Simply the best food in Manchester

Known to many as the most fabulous restaurant in the UK to never receive a Michelin star, the Pride of Manchester has been named the 13th best restaurant in Britain.

“Adam Reid at The French marries perfectly the old and the new and is a dining experience to be remembered.

The Grade II listed dining room has recently been refurbished with new lighting, wall art and paintwork to give it a relaxed, inviting atmosphere.

Steeped in history, the restaurant offers outstanding levels of service, warmth and style that in turn, create a relaxed and friendly atmosphere like no other in Manchester.” – The French

The best fish and chips in Manchester, affordable too!

An amazing stylish chippy with affordable vegan and vegetarian options in-store. All the food is stylized by hip hop culture, synergizing two distant concepts that come together to make something you’d never expect.

Check out a menu here, and you’ll see what I mean!

A great café in a great location

Since its opening in 2005, this family cafe has made food fresh to order with locally sourced ingredients. The café itself is on the ground floor, spacious and large enough to host wheelchair/pushchair users with dietary and allergy food needs.

If there’s anything you should know upfront about Manchester, is that the nightlife is the best in the north.

The music scene of Manchester is legendary and known around the world. The nightlife had a heavy reputation in the late 80s with the ‘Madchester’ scene, which still has an impact on the nightlife scene today.

Other Nightlife Venues in Manchester

If you’re looking for things to do in Manchester for couples then alternatives to nightclubs might suit you.

Where to Stay in Manchester

After you’ve spent the day exploring Manchester and all things it has to offer why not stay the night. I’ve picked out some of the affordable yet stylish hotels the city has to offer.

Free Things to do in Manchester

Manchester is a truly spectacular destination for weekend getaways, after a major re-haul to make the city center more presentable to visitors. No matter what the situation or budget Manchester has plenty to offer.

As part of the CityVerve project, Manchester is a Smart City in the UK that is constantly improving living, working, and social conditions in the city.

There are plenty of free activities and places to visit. Enjoy your visit! 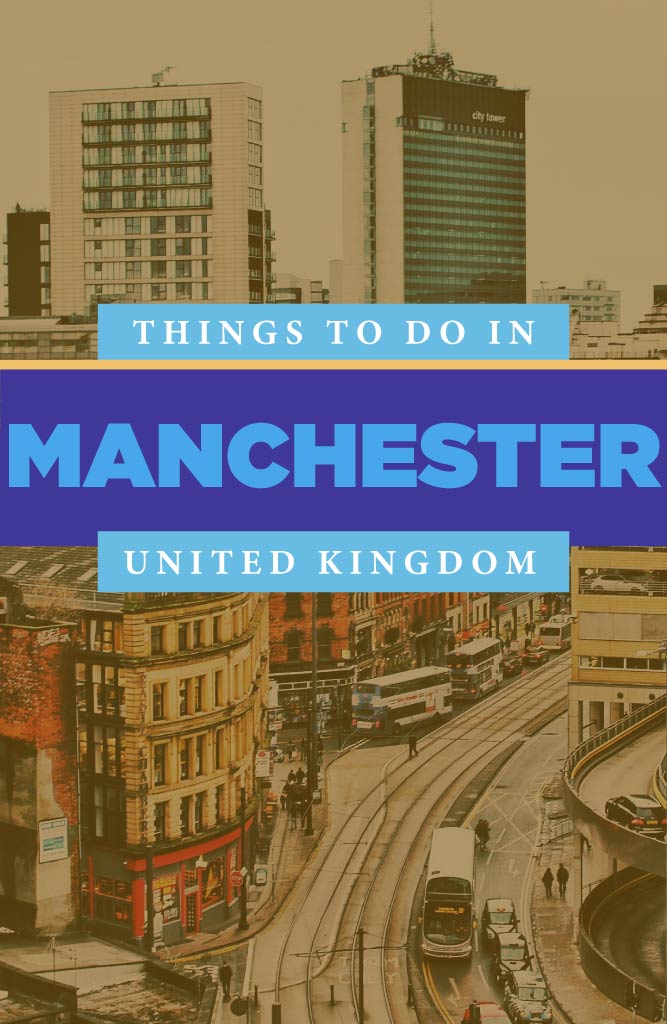