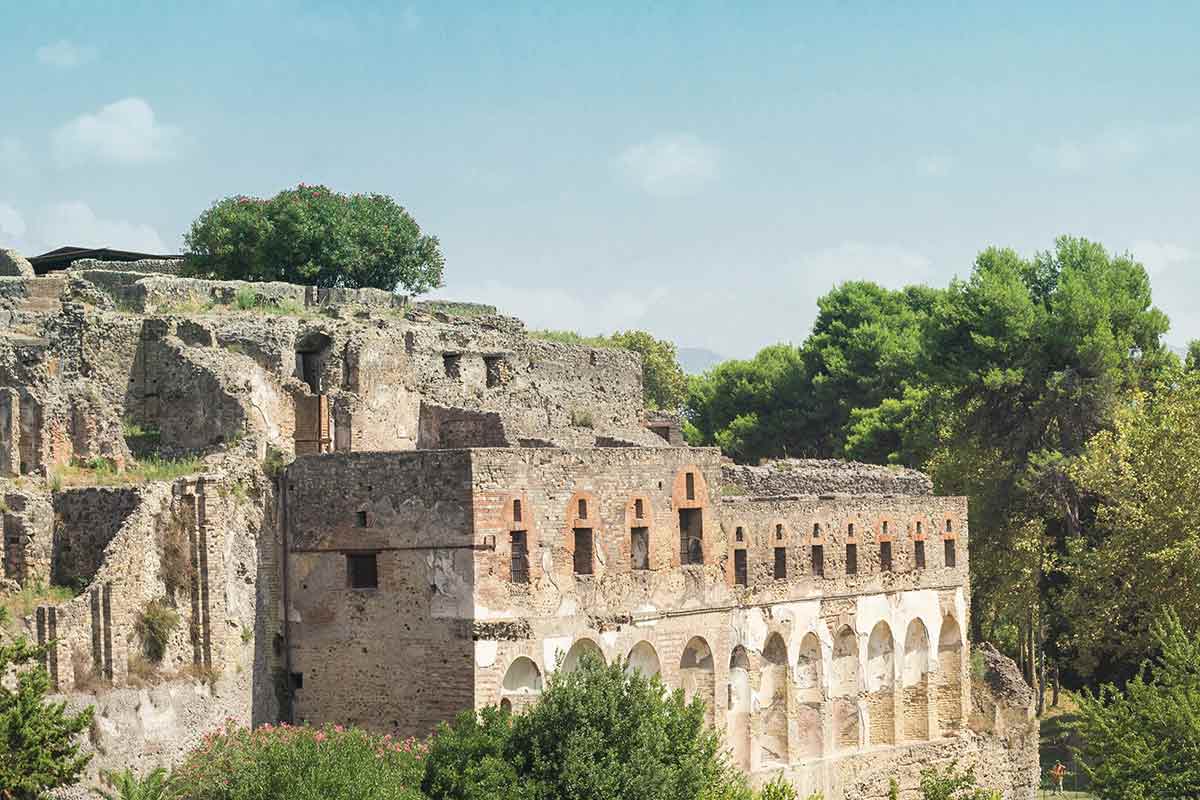 Pompeii is one of Italy’s top tourist destinations, and what attracts people from all over the world is the story behind its ancient Romain ruins.

It was buried under a blanket of ashes and lapilli during the eruption of Vesuvius in 79 a.D., together with Herculaneum, Stabia, and Oplonti.

As one of the most significant archaeological sites of all time, Pompeii is a must-see if you’re traveling around Italy or on a day trip from Naples.

Pompeii is a real step back in time and a once-in-a-lifetime experience.

So, if you are already in Naples you will likely have already read our Naples 2 day itinerary and be ready to take the road to Pompeii.

The ancient city along with the close Herculaneum and other nearby villas was buried under 6 meters by ash and lava during one of the worst Vesuvius eruptions of history. 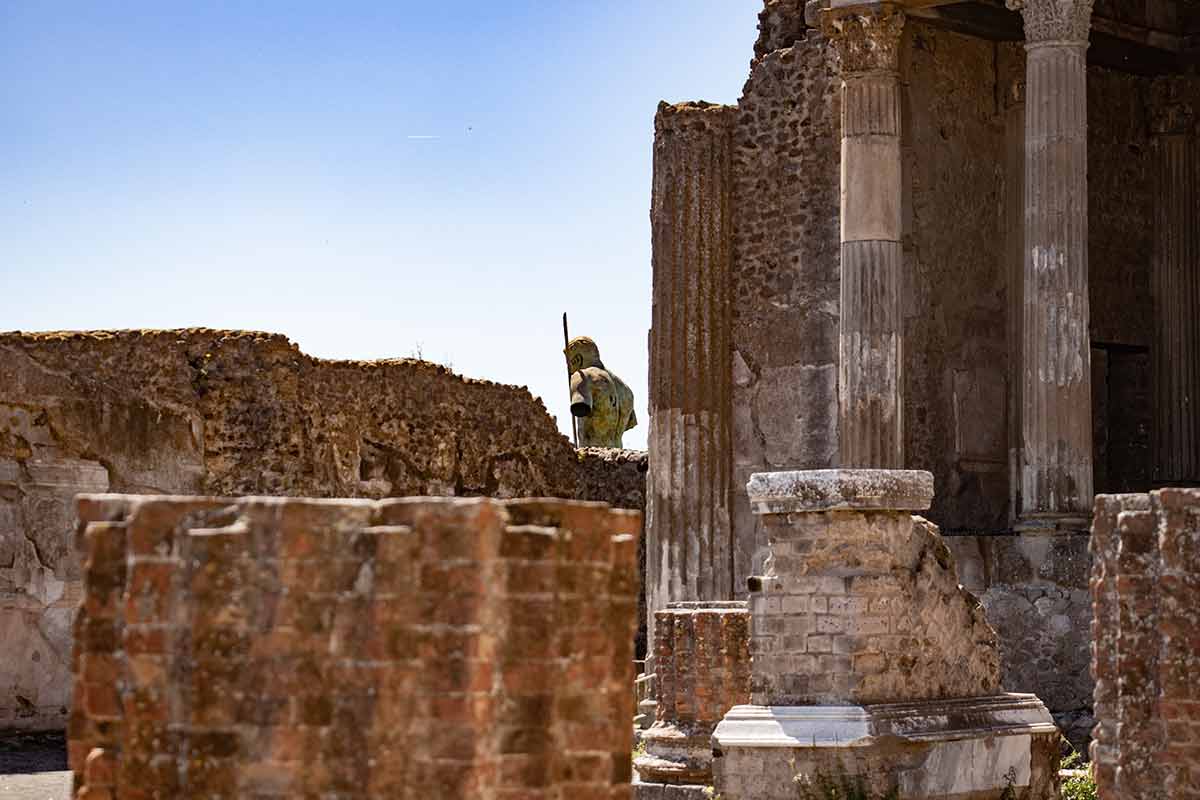 The site gives you a glance at the organization of life during the Roman Empire. You can walk the streets, inside private houses, and spot exquisite works of art all around.

Pompeii’s inhabitant bodies were found in the same position as when the lava took over the whole town.

Is Pompeii worth visiting?

Let’s look at some reasons why Pompeii is a true gem to visit:

If you’re still not convinced by this worldly attraction that lies 25km from Naples, why not take a look at our Italy itinerary to get more inspiration and see where else you could go during your time in Italy?

With all these points to consider before traveling, how far is the journey exactly and what are the best ways to get to Pompeii from Naples?

How far is Pompeii from Naples?

As mentioned above, Pompeii is just 25 kilometers away from Naples and you can either get there by car or by public transport. 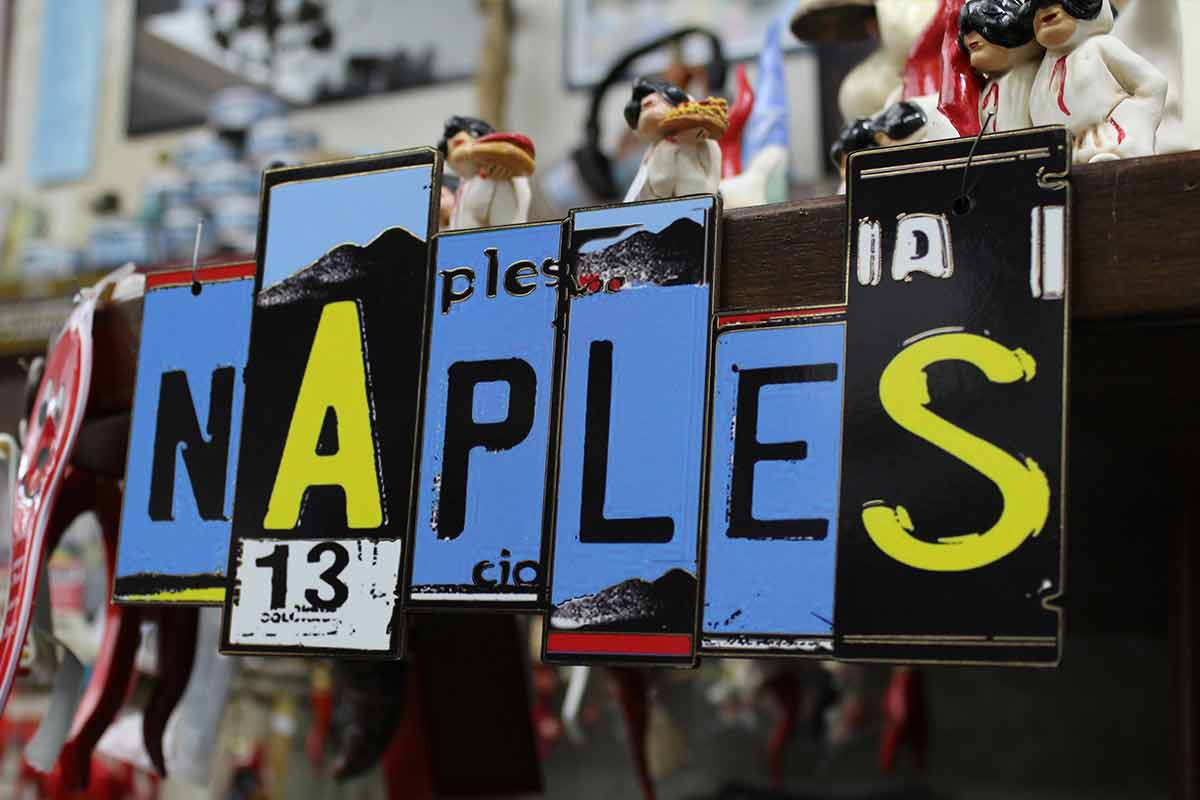 The best option is to take the train from Piazza Garibaldi railway station.

You either choose to travel by Circumvesuviana train which takes 42 minutes or the metropolitan/regional line (Napoli-Salerno) for a shorter trip of 24 minutes.

If you prefer the last option, just bear in mind that the train stop is 10-minute walk from the entrance of the site.

You can also get there by bus, which is a valid option to take into consideration if your accommodation is located in the docks’ area.

The travel time is between 35-45 minutes depending on the traffic.

How to get to Pompeii from Naples

Below we will share the best way to from Naples to Pompeii so you can take the best mode of transport that suits you:

Train from Naples to Pompeii

If traveling by train from Naples there are two preferred options.

The most popular train is the Circumvesuviana line leaving from Porto Nolana or Piazza Garibaldi railway station.

If you’re new to Naples, we suggest taking the train from Piazza Garibaldi located only 5 minutes walk from Napoli Centrale railway station.

For your comfort, we highly recommend you stay at the Starhotels Terminus, situated in front of the Napoli Centrale station.

The line is the blue one called Napoli-Sorrento, when purchasing your ticket ask for ‘Pompei Scavi’.

The train stops are announced and yours is going to be ‘Pompei Scavi – Villa Dei Misteri’.

If you forget to get off at this stop, the next stop is fine. It’s called ‘Pompei’ and it’s just a 10-minute walk from the archaeological site entrance.

The second option is the metropolitan (MET) or regional (REG) train Napoli-Salerno.

This departs from Napoli Centrale station but doesn’t stop at ‘Pompei Scavi’ like the Circumvesuviana one. In this case, you can only get down at the stop ‘Pompei’ and walk 10 minutes to get to the entrance.

Driving from Naples to Pompeii

If you decide to rent a car and travel from the north (Naples), take the A3 Naples-Salerno motorway towards Salerno and exit at ‘Pompei Ovest’. 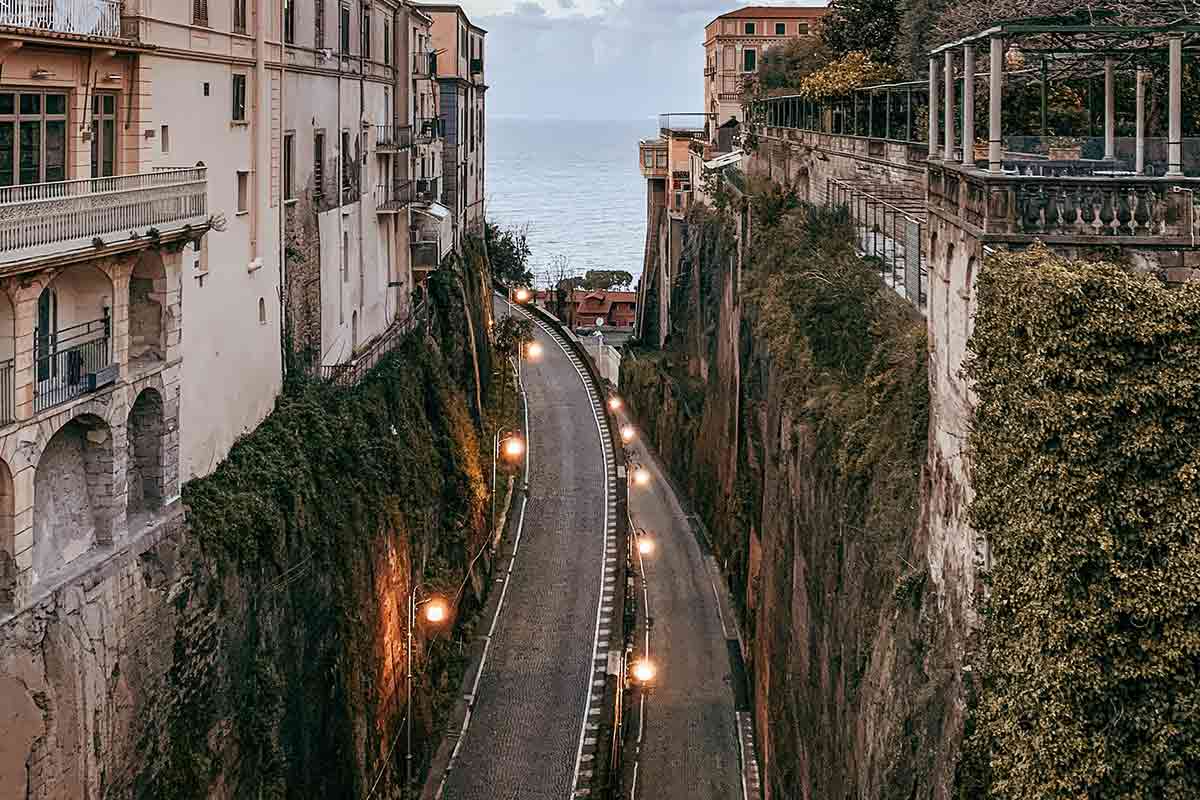 From here, continue on the SS18, turn into ‘via Villa Dei Misteri’ and after a few meters, you’ll reach your destination.

The distance is 25 kilometers and depending on traffic it can take up to 35 minutes. There’s quite a lot of parking space near the site’s entrances.

If you’re coming from the south, always take the A3 motorway, but your exit is called ‘Pompei Est’.

From here, proceed along ‘via Antonio Morese’ towards ‘via S. Giovanni Battista Della Salle’, take ‘via Sacra’ and continue on the SS18 up to via ‘Villa Dei Misteri’.

Getting from Naples to Pompeii

Now you know how to get from Naples to Pompeii by train or by car.

As you can see, the options are many, and it’s pretty straightforward to plan a day trip to the famous archaeological site from Naples.

If you don’t want to plan it by yourself, then you can always join a guided tour leaving from Naples like the Naples or Sorrento: Full-Day Pompeii and Mount Vesuvius Tour one.