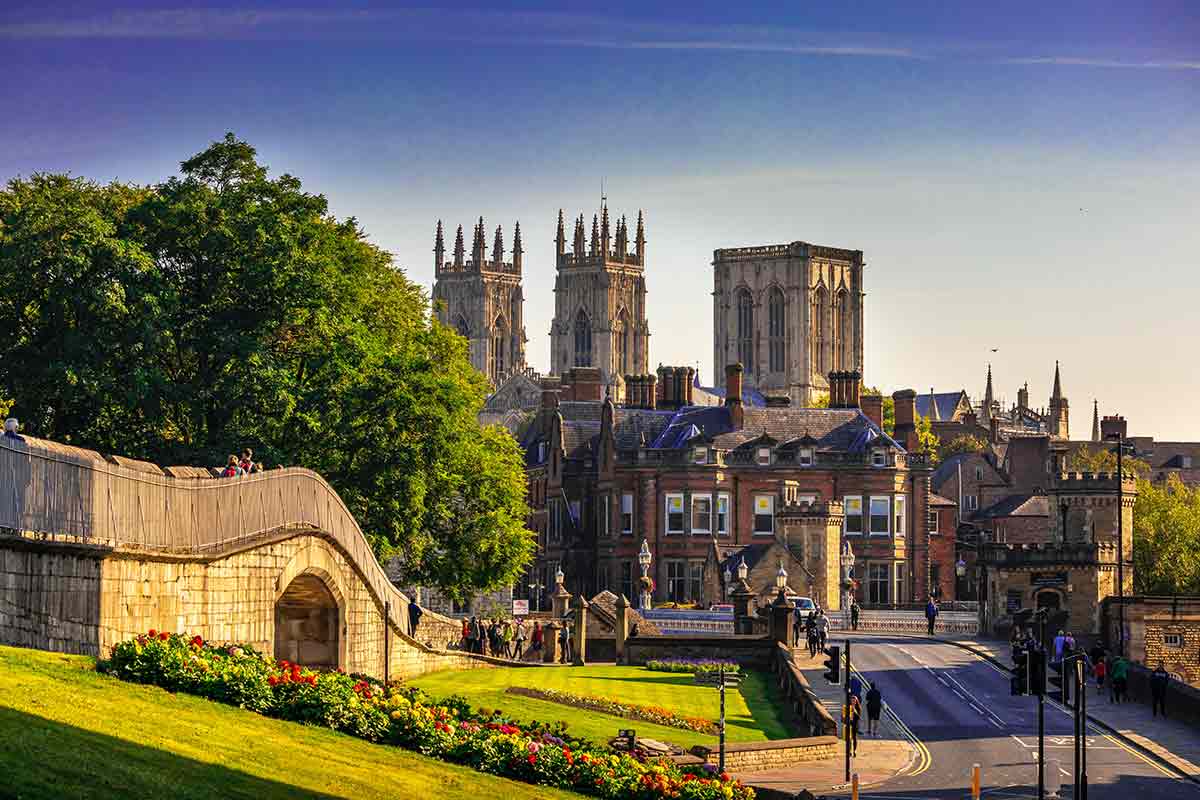 Are you wondering what free things to do in York there are to do?

York is a city steeped in history! Whether you’re looking for a day out, a weekend trip, or a cheap and cheerful day out we’ve got you sorted.

Take a look at these free things to do in York during your visit.

As the former capital of the whole country, this historic city that the north regards as its beating heart also makes up part of our best places to visit in Northern England series, so let’s take a closer look at this city.

There are many things that make York unique, but we all know about the historic significance this city has.

With the longest and best-preserved city walls in all of England, one of the best cathedrals in the world, and the oldest shopping street in the world, the character that this city has is irrefutable.

Free Things to do in York

Arriving in York from Sheffield for example is easy and takes around 45 minutes. The city has good rail connections and easy access via car with plenty of parking facilities.

The question is though, is there a lot to do in York that’s costless?

Well, of course, there is! we’ve compiled a list of free things to do in York, as well as a guide to the city’s eateries and nightlife. Let’s jump right in!

This might be the best quality free museum that the north of England has to offer, as it rivals most museums which require entry fees.

It has an unrivaled collection of the annals of locomotive history, showcasing the public transport of now and yesteryear.

The award, sponsored by Mortons Media via Heritage Railway magazine, has was presented for the museum’s interpretation of the free exhibition Brass, Steel, and Fire.

Launched in September, the exhibition features more than 20 of the country’s oldest model locomotives, which have been brought together for the first time.

Brass, Steel, and Fire delves into the stories of the ordinary people who, fascinated by innovations like Rocket, crafted extraordinary machines entirely from scratch.

Through innovative interpretation, visitors learn how these historic small-scale experiments pushed the boundaries of engineering and influenced the course of the Industrial Revolution.

Sounds good right? Well, it’s one of our top free things to do in York so put it on your list!

In the center of the city is the iconic York minster. It’s the largest Gothic cathedral in northern Europe, and it took 250 years to build; from 1220 till its consecration in 1472.

For a lot of visitors to York, the minster serves as the most memorable aspect of the landscape. The minster is one of the top reasons people visit York.

It has a huge presence in York since it doesn’t exactly have the skyscrapers and multi-story buildings competing for airspace.

You will find people who visit for a days shopping will also wander past the minster to take in the views and see the attraction it offers.

What makes York minster better than St. Paul’s in London, or Notre Dame in Paris is that it doesn’t hide from view.

The minster, just like Reims cathedral, stands alone to create an image that cannot be paralleled.

The title “minster” is attributed to churches established in the Anglo-Saxon period as missionary teaching churches and serves now as an honorific title.

To enter the Minster and climb the towers, an entry fee is required.

However, don’t let that put you off if you are looking for a free day out, just sitting outside the Minster and enjoying a picnic creates just the same amount of atmosphere and aura of magnificence.

St. Mary’s Abbey is just one of the many sights within the Museum Gardens of York.

The Gardens were opened in 1830 as one of the first-ever purpose-built museums in Britain. The ruins we now see are all that remains of one of the wealthiest and most powerful Benedictine monasteries in England.

Its story ties together two of the most important events in English history: it was begun by William the Conqueror to reinforce his hold on the north after 1066 and ended by Henry the Eighth as a consequence of his Reformation of the church.

The abbey estate occupied the entire site of the Museum Gardens and the abbot was one of the most powerful clergymen of his day, on a par with the Archbishop of York.

In medieval York, the abbey sat opposite and mirrored the Minster: two great buildings dedicated to worship.

The monks would spend their days working in abbey administration, copying books, trading with merchants, providing food and supplies for the monastery, managing the abbey’s estates, and helping the poor.

The abbey and the gardens are easily accessed from the city center and free for you to walk around and enjoy. Parking is also available close by.

If you visit York, it would virtually be a crime to not visit the Shambles. This street is not just historic and iconic, but it’s also influential. Rated as one of the top 10 things to do whilst visiting York.

Diagon Alley from the Harry Potter film saga was directly inspired by this amazing street which used to be the most popular meat selling market in all of England.

As recently as 1872 twenty-five butchers’ shops were located along the street, but now none remain.

The Shambles was actually mentioned in the Domesday Book in 1086, which shows just how popular it still is almost a thousand years later.

In some sections of the Shambles, it is possible to touch both sides of the street with your arms outstretched.

The Shambles offers lots of unique and independent shops to catch your curiosity as you walk around the city. A great place for a day out browsing and window shopping.

Places to Eat in York

If you’re looking for a bite to eat during your visit to York, there’s a lot to choose from.

We will suggest not to visit the chain restaurants and fast food places in the city center, only because you wouldn’t need an online guide for them.

Plus, the money that goes into the independent restaurants and cafes gets circulated into the local community. So with that in mind, here are the best places to eat in York:

If you’re looking for the best food in the area, look no further than Skosh. With vegetarian and vegan options available, this amazing eatery has been featured on the Michelin List for 2020. You need to try the mackerels, they are the best we’ve ever tasted.

If you’re looking for a place to get a mixture of different cuisines in a comfortable setting, this is the place. From afternoon tea, to Thai sea bass, this has everything your heart desires at moderate prices.

The Rattle Owl is an independent, casual-dining restaurant housed in a restored Grade II* listed building. Led by Head Chef Tom Heywood, the seasonal menu draws from Yorkshire’s abundance of produce. You need to try the taster menu, it’s an amazing spread.

If you’re looking for something completely different, try out Turtle Bay. A modern take on Caribbean food, with vegan and vegetarian options available. You need to try Trini Curry Chicken, it’s an amazing dish you don’t expect to see in York.

A cute little pizza bar around the corner from the Minster. It has some vegan and vegetarian options too. Just the Margherita is amazing enough, but most of the other pizzas are just stunning.

With plenty of things to do in York during the day and the history to soak up what about the nightlife? Don’t worry we’ve got you covered, York has a vibrant nightlife for you to enjoy.

York’s largest nightclub is Kuda, which encompasses which is set across three floors of the old York Institute building on Clifford Street.

They have different rooms accommodating different musical tastes, from House, Club and Dance anthems through to R’n’B and Hip-Hop.

Mansion, the new name for the old Ziggy’s, has rebranded itself as the home of more ‘serious’ dance music. You can find Electronica, House and Techno played here.

Like Kuda and Fibbers, on weeknights during term time Mansion hosts student events. These mid-week nights tend to be a student only so no NUS card, no entry.

York’s nightlife is not all about nightclubs, however. There are plenty of places in the city where you can stay out and party till the early hours.

Where to Stay in York

If you’re looking to stay the night in York we have found some of the best independent hotels the city has to offer.

Free Things to do in York

York is an amazing destination for weekend getaways, after a major re-haul to make the city center more presentable to visitors it is a stunning city to visit.

There are plenty of free activities and places to visit whether you want to soak up the history hit the shops or sample the nightlife.Enjoy your visit!