Leeds is the largest city in the West Yorkshire county and the fourth-largest urban economy in the UK.

There are many things that make Leeds unique and its historic significance is one of them.

Leeds was actually one of the top producers of wool during the boom of the industrial revolution and became a powerhouse when it utilised its very own river Aire.

As part of our best places to visit in Northern England series, we are taking a closer look at this city.

Free Things to do in Leeds

Nowadays, it’s very much a modern city with a huge student population and new infrastructure.

The question is though, is there a lot to do in Leeds that’s free? Well, of course, there is!

We’ve compiled a list of free things to do in Leeds, as well as a guide to the city’s eateries and nightlife. Let’s jump right in!

One of the underrated gems of Leeds city centre has to be the Victoria Quarter.

A mini-shopping street in the style of the Piccadilly Arcade in London, this is the most historic shopping arcade in West Yorkshire.

The County and Cross Arcades were built between 1898 and 1904, designed by the theatre architect Frank Matcham.

They were notable for glazed barrel roofing decorated with copious amounts of faience from the Burmantofts Pottery, a number of mosaics and plentiful use of marble.

Matcham’s development included the Empire Theatre and all three constructions were in the same style: three storeys decorated in a free baroque style with pink and buff terracotta.

Go window shopping in one of the most impressive examples of Victorian-era architecture in the north of England.

The Tetley is a pioneering centre for contemporary art located in the stunning art deco headquarters of the former Tetley Brewery.

They always offer a warm Yorkshire welcome whether you’re here to see the latest exhibition of contemporary art, take part in a workshop or event, or sample the locally sourced menu with a pint of Tetley’s.

The Tetley name represents one of Leeds’ oldest brewing dynasties, synonymous with the city for over 200 years.

The site has important social and industrial significance, with the brewery and employees greatly contributing to Leeds’ rich history.

So if its art you’re after The Tetley is one of the top things to do in Leeds.

Leeds City Museum hosts two changing exhibitions per year, along with exciting events for everyone to take part in. In 2001, Leeds City Council bid for National Lottery cash, and in 2004, it was awarded £19.5 million.

So, in 2005 the Leeds Mechanics’ Institute building began to be redesigned as Leeds City Museum, finally to reopen in 2008.

Since 2008. The museum has held natural history exhibitions, Hellenic and Roman exhibits, and all manner of artworks.

The highlight of the museum is definitely the Leeds Mummy. It’s the sarcophagus of the Karnak priest known as Nesyamun which dates back all the way to 1,100 B.C.

Born from an idea by two local artists in 2004, the trail was officially launched in 2009, and originally featured ten locations dotted around the civic quarter of Leeds.

Within months a further 15 locations had been spotted by the public as if mimicking the ever-alert, 360 degrees, rotating-headed wonder of our hoot-happy feathered friends.

If you visit the twenty-five locations across Leeds City Centre marked on the Leeds Owl Trail map you will discover some unique owls.

Suddenly you will set out on a voyage across history as each owl informs you of why it is there and gives you a brief snapshot of what it has seen in its lifetime.

The Owl Trail adds to our active yet free things to do in Leeds.

Kirkstall Abbey is a marvel to behold with its dramatic architecture and magnificent ruins. The abbey is one of the most complete Cistercian monasteries in Britain and the place to visit for historical architecture in West Yorkshire.

As a Grade I listed building and Scheduled Ancient Monument it is a haven for historians, artists and visitors to Leeds. Also rated one of the top 10 places to visit in Leeds.

Step back in time and learn about life as a 12th century monk in the visitors Centre. Here you can explore the history of the abbey at the interactive Visitor Centre with catalogues, images and touch devices.

The park at Kirkstall Abbey is a great space to play, enjoy a picnic and explore all year round.

Enjoy a leisurely stroll around the grounds or along the river. Also, keep an eye out for a wide variety of events being held throughout the year they have plenty to keep you entertained.

There is also a large playground for children to let off steam! This is the best free activity for couples and families alike when visiting Leeds and the West Yorkshire area.

Places to Eat in Leeds

If you’re looking for a bite to eat during your visit to Leeds, there’s a lot to choose from. We will suggest not to visit the chain restaurants and fast food places in the city centre, only because you wouldn’t need an online guide for them.

Plus, the money that goes into the independent restaurants and cafes gets circulated into the local community. So with that in mind, here are the best places to eat in Leeds:

If you’re looking for the best Indian food in the area, look no further than Bengal Brasserie. With a lot of vegetarian options available, this amazing restaurant in the city centre is very popular with the locals.

With a fully licensed bar, air-conditioned pleasant surroundings and excellent food, the Bengal Brasserie in Leeds city centre is the ideal choice whether you are looking for a romantic meal for just the two of you.

Or if you fancy an enjoyable evening out with the family or are simply seeking great “award-winning” food in a friendly and comfortable environment. You need to try the Special Patil Curry, it’s an amazing dish that’s slightly different to what we’d normally order!

Traditional Latin food and Spanish Tapas at the heart of the Leeds city centre. Caracas Grill and La Taberna joined together to create a place where customers can share and try different dishes for a diverse taste experience while enjoying a warm and familiar atmosphere.

A great little café style burger bar with convenient prices and delivery options. Try the hot dog and the nachos, they are to die for.

If you’re looking for something completely different, try out this little place in the city centre. Not only has this amazing little eatery been a finalist for the Oliver Awards 2020, but their best dish was featured on Masterchef! You need to try the Nasi Lemak, it’s very traditional Malaysian and something you don’t often see done well in the north.

Leeds is home to plenty of fantastic bars and clubs, giving you a guaranteed night to remember no matter what you are looking for.

For those after a quiet pint, you’ll find traditional pubs and cobbled streets aplenty along Briggate. Including Whitelock’s, a cosy hideaway still standing strong after 300 years.

If craft beer is more your style, why not check out the wide selections available at North Bar, Beer Hawk and Assembly Underground.

PRYZM: A big and well-known nightclub in the centre of Leeds. Hosting two large rooms playing house and R’n’B in one and party anthems in the other you have plenty of choice. The club is open Thursday through to Sunday each week.

Wire: This nightclub has over-300 capacity and some of the most up to date house and techno music. Built in an old underground bunker you’ll be up close and personal to some fellow partyers, but it creates an atmosphere unlike any other venue in Leeds.

Mission: The city’s legendary nightclub Mission has undergone a total revamp of its main arena. The area is centred around the installation of a £60,000 Evo7 Funktion-One sound system. This is the first system of its kind in Leeds and has made Mission one of the best sounding clubs in the country. If that’s not a nightclub to visit in Leeds then what is?

O2 Academy: One of the city’s most historic and stunning venues, it’s the number one destination for the biggest acts in music, clubbing and comedy in a Grade II listed building unlike any other in the country. There are many academies in the UK, but this has to be the best one. Many people from nearby towns and cities visit Leeds for the O2 Academy and spend the weekend exploring the city.

The Key Club: The Key Club is the number one Rock and Alternative venue and club in Leeds, Yorkshire. It hosts a number of different live acts and club nights with music from some of the best acts in the north of England.

Where to Stay in Leeds

Leeds is a great place to have a weekend city break with all of the ideas on entertainment, shopping, food and free things the city has to offer. Now lets take a look at where to stay in the city and what the hotels have to offer.

Free Things to do in Leeds

Leeds is an amazing destination for weekend getaways, after a major re-haul to make the city centre more presentable to visitors.

There are plenty of free activities and places to visit. Whether you are looking to soak up the history the city has to offer, looking for dining and entertainment or a night out clubbing Leeds has it all to offer.

Whatever reason you decide to visit this West Yorkshire city we hope you enjoy your visit! 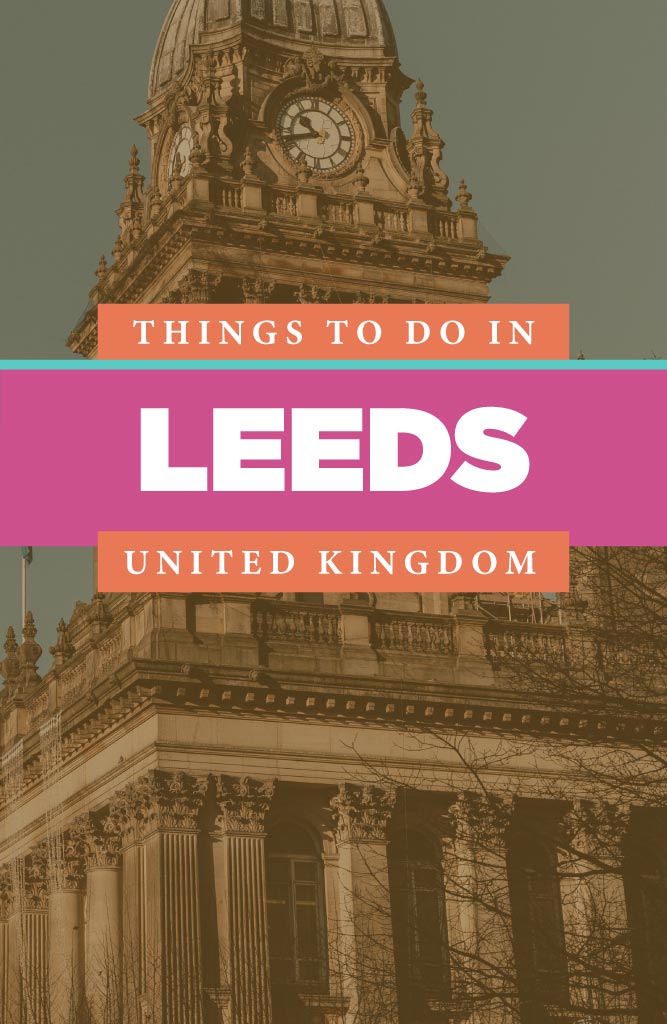